While the Center Pompidou-Metz (57) is celebrating until January 27 the meeting between the visual arts and the lyrical genre in the exhibition “Opera World, the quest for total art”, the editorial staff of Muuuz returns to the most beautiful scenographies of operas signed by big names in contemporary art. From Anish Kapoor to Berlinde De Bruyckere, a look back at the visual artists who have made opera a fertile playing field for experiments and creations.

Pelleas and Mélisande, opera by Claude Debussy (1902), new production at the Royal Theater of La Monnaie - De Munt (Belgium), with a staging by Pierre Audi and a scenic arrangement by Anish Kapoor (2013)
British artist Anish Kapoor is best known for his controversial monumental sculptures - he is notably the father of Dirty CornerSays The Queen's Vagina, a work in rusty steel, installed in the gardens of Versailles during his carte blanche at the château, which hit the headlines after being vandalized in 2015 -, less for his collaborations with directors.
Before its controversial opera decor Tristan und Isolde (Tristan and Isolde) directed by Daniel Kramer at the London Coliseum in 2016, in 2013 he imagined the stage set for the opera Pelleas and Mélisande for the Franco-Lebanese artistic director Pierre Audi. Far from transposing his plastic vocabulary to the stage, Anish Kapoor orchestrates the fruitful encounter of his art with dramaturgy and music.

Standard, opera by Vincenzo Bellini (1831), new production at the Teatro La Fenice on the occasion of the 56th Venice Biennale (Italy), with a staging, sets and costumes by Kara Walker (2015)
African-American feminist artist Kara Walker discusses the history of slavery, as well as the persistence of phallocentric and racist discourse in the current socio-cultural context of the United States. She indeed proposes to deconstruct them through a protean and critical artistic language. His famous black silhouettes, cut out of paper, then placed on a white background, recall the symbolic dimension of colors.
In 2015, she was invited to the 56th Venice Biennale by the curator Okwui Enwezor to direct the staging, the sets and the costumes for Standard at the Teatro La Fenice. Kara Walker then reshuffles the plot and transforms Gaul, invaded by the Roman Empire around -50 BC, into an imaginary African colony placed under the yoke of European power at the end of the XNUMXth century. Her daring reinterpretation of this great classic by Vincenzo Bellini and her diversion from archetypal models of Africanity and femininity challenge racial and sexual hierarchies as conceived by the West.

Moses und Aron, opera by Arnold Schoenberg (1954), new production at the Opéra Bastille (France), with a staging, sets, costumes and lights by Romeo Castellucci (2015)
Romeo Castellucci is an Italian visual artist and scenographer with a passion for theater. Become famous in Europe for his avant-garde staging, he creates, since the 1990s, radical interpretations which are part of the heritage of the "theater of cruelty" as it is conceptualized by the French writer Antonin Artaud in his essay The Theater and its double.
On the stage of the Opera Bastille in Paris, he confronts the public with a dreamlike version of Arnold Schoenberg's unfinished masterpiece. In the hands of Romeo Castellucci, Moses and Aaron - eminently religious opera - comes to reflect on the power of the image through a series of living paintings, which transport the public to a mysterious universe.

Penthesilea, opera by Pascal Dusapin, world premiere directed by Pierre Audi at the Théâtre Royal de La Monnaie - De Munt (Belgium), with a scenography and scenery by Berlinde De Bruyckere (2015)
Contemporary Flemish visual artist, Berlinde De Bruyckere develops an artistic universe imbued with spirituality and violence: sculptures, drawings and installations that mix morbid sensuality and agonizing scenes, inspired by symbols of Christianity - like the figure of martyrdom - and dramas of his time - such as the war in Kosovo and the Rwandan genocide.
In 2015, she tried to design an opera decor, when she created the striking scenography of the seventh opera by Pascal Dusapin, which sets to music one of the most remarkable revisited ancient myths of the era modern. To recount the complex destructive passion between Penthesilea and Achilles, Berlinde De Bruyckere imagines an immersive scenic device steeped in violence, made up of videos and accumulations of horse skins.

Tristan und Isolde (Tristan and Isolde), opera by Richard Wagner (1865), new production at the Opéra Bastille (France), with a staging by Peter Sellars and a video scenography by Bill Viola (2005)
Figure of the contemporary American art scene, Bill Viola specializes in video art by creating digital tables and video installations. Building on its international success, it was honored at the Grand Palais (8th arrondissement) in 2014 in a retrospective revealing for the first time in France a large corpus of his film work.
Invited by Gerard Mortier to the Opéra Bastille in 2005, Bill Viola sublimates Richard Wagner's masterpiece, with a narrative video installation. By establishing a dialogue with the staging of Peter Sellars, Bill Viola explores all the expressive power and the pictorial richness of video art. Several years after its creation, this new production was replayed at the Opéra Bastille, in spring 2014, then in autumn 2018. 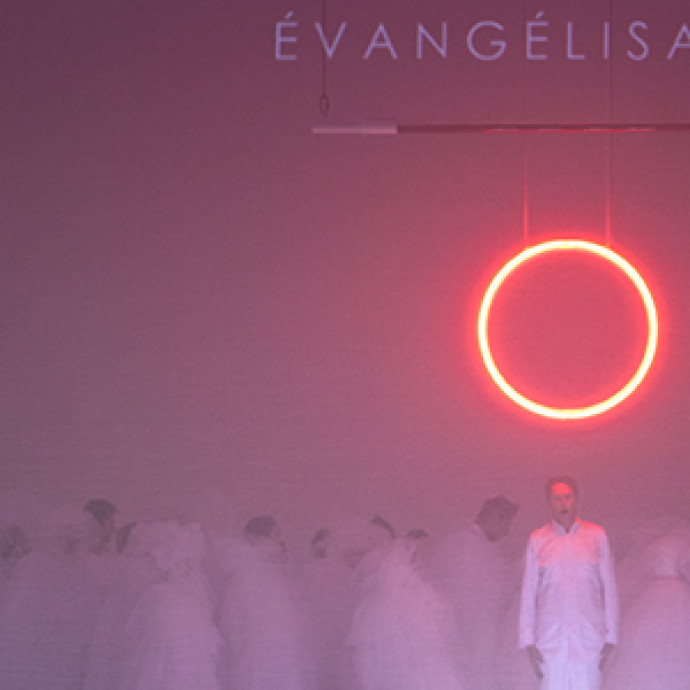 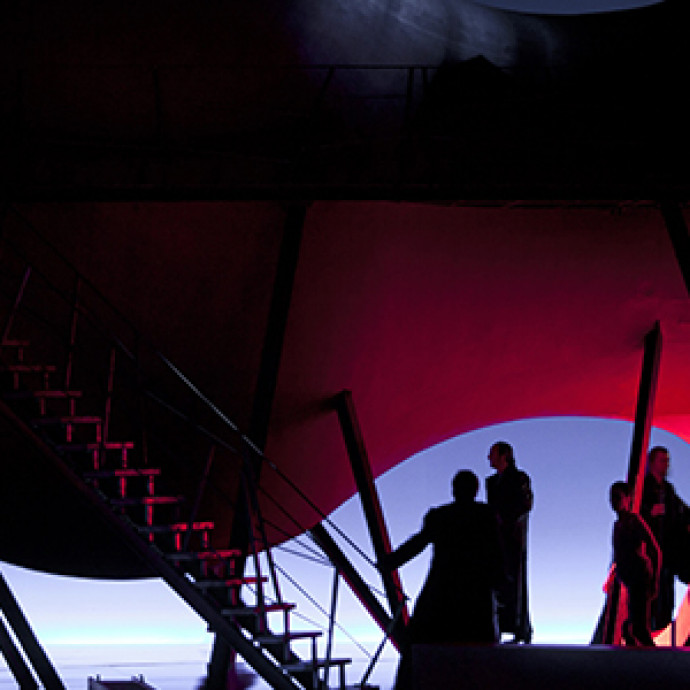 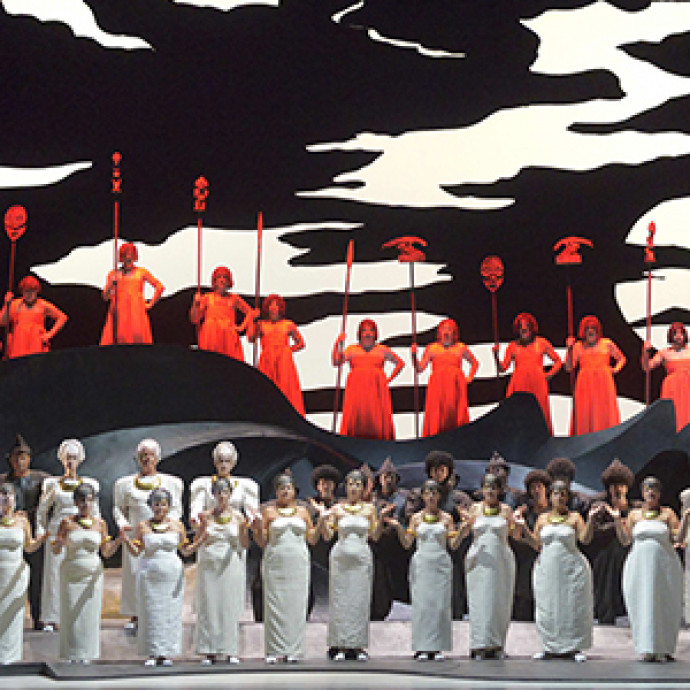 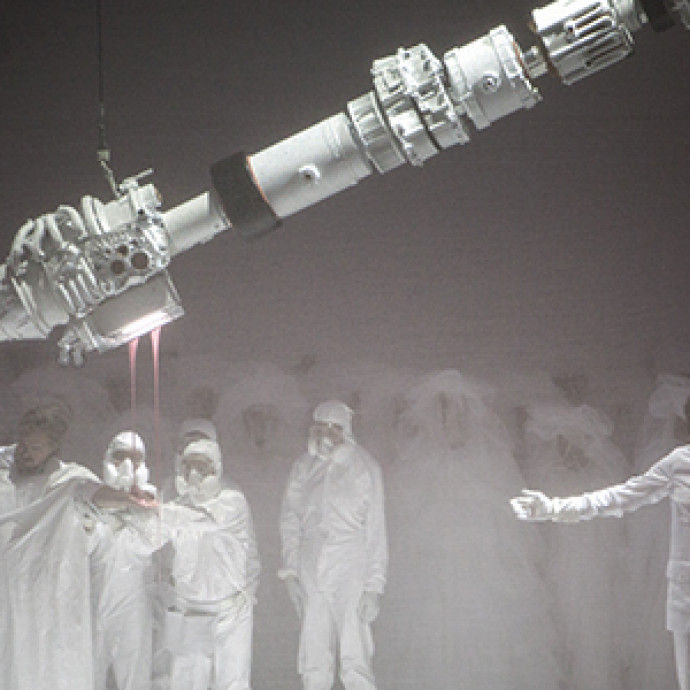 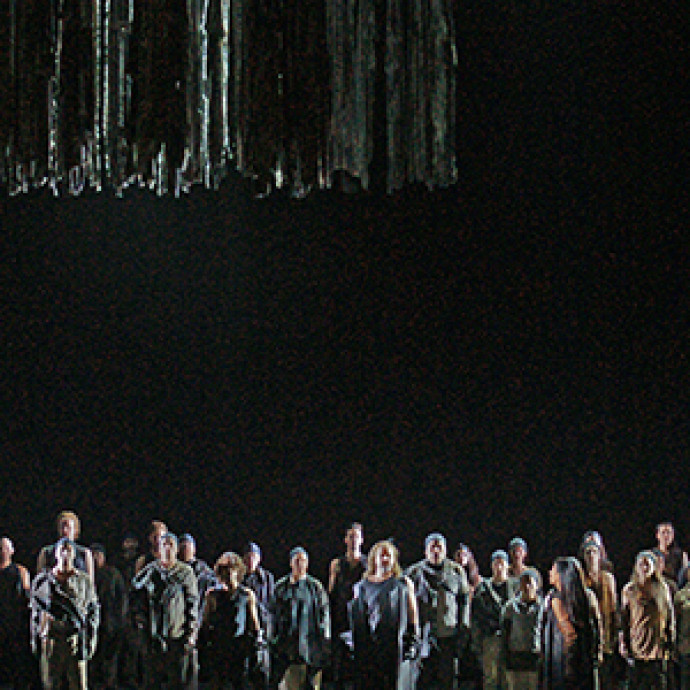 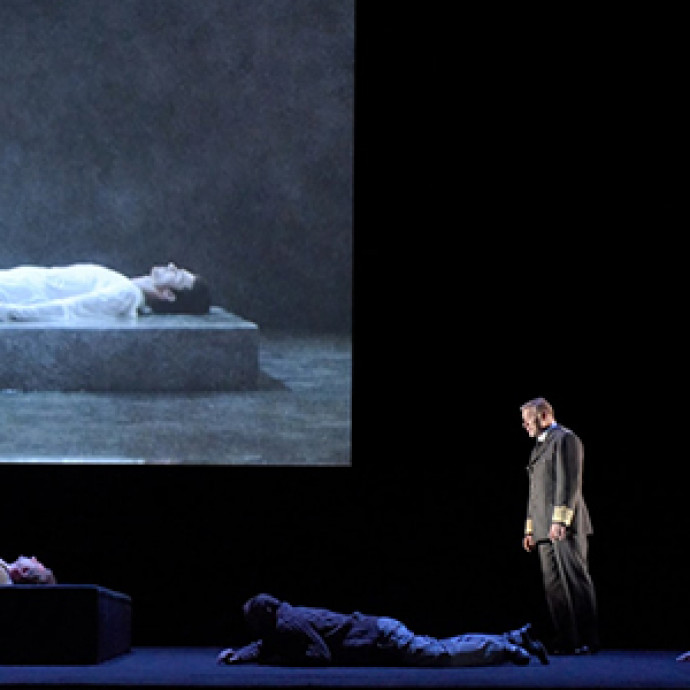